Serving the strangers among us 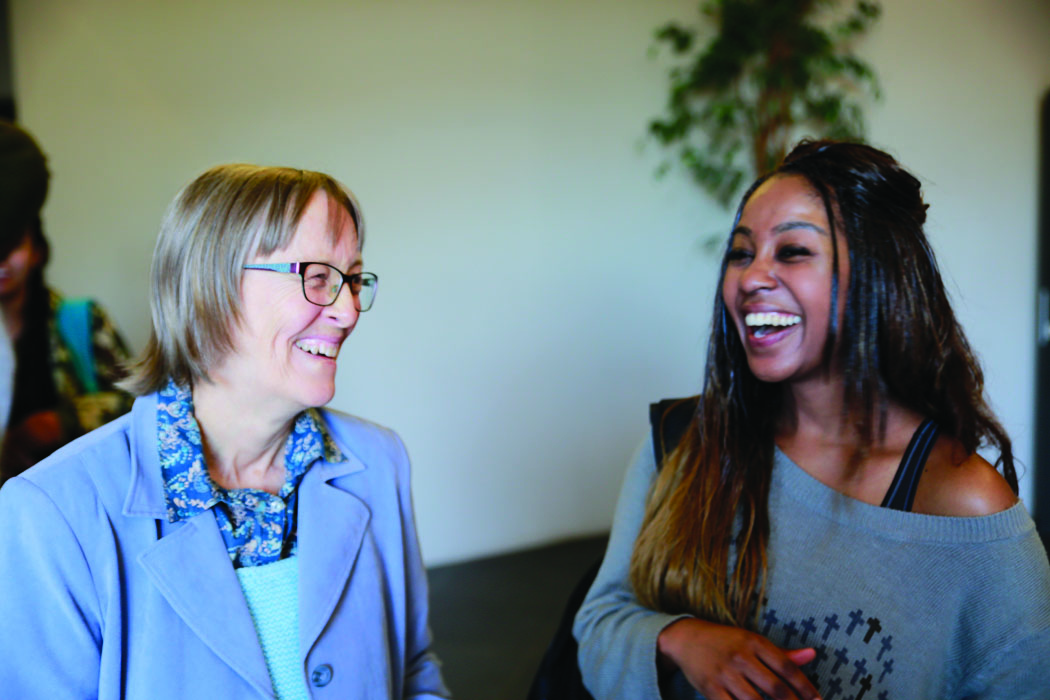 SIM South Africa missionary Sandy enjoys a moment with one of her TESOL training students.

Individuals and churches looking for ways to serve the strangers among them might consider helping them learn English.

“This is a great way that churches can reach the populations that are on our doorstep,” said Sandy, an SIM SA missionary in Cape Town. “There are Somalis in many suburbs; there are Chinese all over the place; there are French-speakers in our parking lots – many of whom have qualifications, but they can’t use them because they don’t have English.”

Sandy, originally from Johannesburg, has been with SIM SA for nearly 30 years. She has served in education, student outreach, and urban evangelism in South Africa and Ethiopia. Two years ago, she established a TESOL (Teaching English to Speakers of Other Languages) training programme at a local college in Cape Town.

“It’s the only place that I know of in Africa that has TESOL as part of an undergraduate degree,” she said.

The programme consists of four university-level modules totalling 56 credits and includes instruction, study, observation, and practice. It can be taken by full-time students as a two-year minor within their three-year degrees or by others as a stand-alone programme. Many of the students have completed the basic 120-hour module. Recent graduates taking a gap year, teachers wanting to refresh their skills and knowledge, and workers seeking new challenges as they approach retirement are among those Sandy believes could find TESOL rewarding.

“Language is a great way of building relationships,” she said, “so it’s a very valid way for people ministering and serving in communities where English is a really big need, and it can make a huge difference in people’s lives.”

As well as helping neighbours improve their lives, TESOL can also help pastors and missionaries get better training.

“You can’t really get a theological education in Africa without English, so I see equipping people to teach English well as a very important skill for enabling Christian leaders to be trained,” Sandy said. “It’s not an end in itself, but without good English, it’s really difficult for people to get a high level of leadership training.”

Sandy said that about twelve students have completed the first two modules, and several of her students are already putting the lessons into practice. One is helping children at a school in Hout Bay, three more are preparing to go to South Korea next year, and a fifth is looking at teaching in another part of Asia.

“So although it’s been going for a short while with only a few students completing the course, I’m already seeing students using it to serve,” she said, adding that she hopes the programme will grow to have about fifteen students at each level.